How to help students design educational board games

Getting students to create an educational board game is an popular method of consolidating knowledge of a topic. However, reinforcement and acquisition of historical knowledge should lie at the heart of any such activity to ensure it is time well spent. Credit should therefore be given to the students based on the gameplay, the presentation and the simplicity of the rules, but with a large proportion of the total marks being set aside for the educational value of the game. The best way of ensuring this factual knowledge is tested is for the students to design a range of “Good News” and “Bad News” playing cards – complete with consequences – that are picked up after landing on certain squares on the board (“Congratulations! Stalin has placed you in charge of the prestigious Moscow underground railway project! Move forward three spaces”). A third set of cards could test factual knowledge.

In a subsequent lesson, students play several games over the course of one or two lessons and peer assess each one. 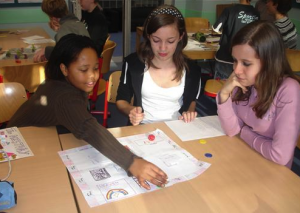 This approach works particularly well at the end of a study unit to consolidate knowledge and understanding. However, students could also be given a completely fresh body of factual knowledge and challenged from the outset to transform this into a board game, incorporating fresh research as appropriate.

Although there is a temptation to see this approach as being particularly suited to younger year groups, it also works surprisingly well with older students: my IB History students produced games based on Stalin’s rule of the USSR with an interesting range of game cards based on positive and negative examples of his economic, political and cultural policies.

With younger students I adopt this approach when teaching them about the spread, symptoms, cures and consequences of the Black Death. I start by providing all students with a summary sheet of key points under those three headings. As a warm-up exercise, they spend a few minutes reading through the points in the table. For each one, I ask them to consider how they could present this as a “mime” to the class. I then call up a person in the class and secretly point out to them just one of the points from the table to mime to the rest of the class. At the end of the mime (which should take no longer than a few seconds) each member of the class should write down which they think it represented. The game is repeated using 9 other students miming 9 other points, one after another. I then tell the class the correct answers and ask them how many they get right? [more on miming, freeze framing and body sculptures here]

Next, students are invited to in pairs or in groups of three to come up with their game concept. This phase is particularly important to structure properly, so I provide students with the following questions in the form of a handout which helps them to methodically generate an effective game design:

How do you decide who starts the game?

Will the players take on different roles?

What is the objective of the game? Is the winner:

How will the cards picked up affect the game?

I find it is worthwhile during this brainstorming phase to pause after the first ten minutes, have a discussion about how things are progressing, and then tell the class that after another ten minutes we will discuss ideas they have come up with regarding (for example) the shape of the board. Repeat this process of ten minutes of design work and five minutes of feedback on a particular issue, for the duration of the lesson to ensure the class stays focused and productive.

The next lesson should be devoted to producing the cards for the game (these will be picked up by players if they land on particular squares on the board, labelled in this case ‘Causes card!’, ‘Symptoms card!’ or ‘Consequences card!’). Different students in each group should take charge of producing “Good” and “Bad” cards for each category using the original prompt sheet to help them. For example, a “Consequences card” might read “Good news! The shortage of labour following the Black Death so your wages go up – move forward three places!” (the actual ‘outcome’ of each card, of course, depends of the game concept in question and can be added later if this is still being decided). As far as possible, aim for an equal number of ‘good’ and ‘bad’ cards, and highlight key words as appropriate.

Homework time should then be set aside for students to actually make their board games – I don’t set any other homework for a couple of weeks on this basis. I make a particular point at this stage of instructing students to ensure that they produce clear instructions about how to play the game as part of this process, because other students unfamiliar with the game will be playing it and will not get a great deal out of the experience if they don’t know the rules. They should also ensure that if they need things like counters and dice, they submit these too as part of their final project.

When all the work has been collected in, set aside at least one hour for the class to play each other’s games. Prior to the lesson, spread the games around the room and identify each one with a number on a slip of paper. Students should start by sitting down alongside their own game and having five minutes to make any final adjustments. Then, each group proceeds to the next game in the room (for example, if they have produced game 1 they move to game 2; the group with the final game should ‘loop round’ to game 1). Before they start, instruct them that whilst playing, they should assess the game based on its educational value (most important), creativity, presentation, and gameplay. Students should then have ten minutes to play the game they have been allocated (it is a good idea to have a classroom timer on prominent display, for example the one I have developed at www.classtools.net/timer).

When the ten minutes is up, students should have a further few minutes to give the game a score out of 25, which I divide up by allowing a maximum of 10 points for educational value and 5 each for creativity, presentation, and gameplay. Each group can be given a slip of paper for this purpose, and the teacher can then use these later to inform their own marking and feedback very efficiently:

With these slips completed and handed in to the teacher, students can move to the next game in the classroom and the process can be repeated for as long as you consider appropriate. Sometimes I take an hour on this, but if the students are clearly getting a great deal from the exercise and are keen to do so then I try to find further time to ensure that all the games are played by as wide a range of people as possible.

There are several ways that the board game approach can be improved further.