Creative approaches for using maps in the history classroom

As well as being are a fantastically rich source of historical information, maps can provide the basis of some effective and interesting classroom activities. Here are a few ways I use them in my history classroom which are easily transferable to other topics and subjects.

1. Convert a narrative into a Google Earth Tour

Students can be provided with a timeline of key events, and challenged to plot these on a map or in Google Earth to give them a fresh perspective and gain some geographical awareness of the topic in question. Examples include:

Tsarist Russia on the Eve of World War One 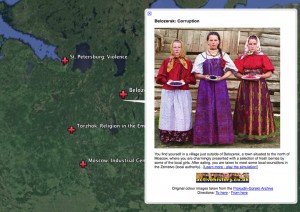 2. Place one map inside another to stress scale of territory/impact

It is very easy for students to overlook the vast scale of a territory being studied, despite the fact that in some instances this provides a crucial means of understanding the process of change and continuity. In this sense, placing one feature inside another can provide a quick but effective means of illustrating scale. For example:

3. Anticipate and research key features on a blank outline map at the start of the topic

Rather than providing students with a detailed map as a reference resource (which, more likely than not, will end up filed away and neglected), provide students with a blank outline map and challenge them to label key cities, sites and natural features using whatever sources they have available to them. This is particularly useful when the study of the topic will require frequent reference to particular regions and cities.

This phase is particularly useful if students have studied this place before. Provide students with a blank outline map and then ask them, from their existing knowledge and through their own powers of deduction, where they anticipate certain borders and places are located.

One of the most effective examples I use involves a study of the Spanish Civil War. Students are provided with a map illustrating the division between Republican and Nationalist zones at the start of the war in 1936. They are then asked where they anticipate that the Nationalists will focus on in terms of territory to be seized. I then reveal the next map which shows the progress of the Nationalist armies. The process is then repeated in a series of maps bringing us up to 1939. At the end of the exercise, we discuss what appears to be the essence of the Nationalist strategy (in particular, Franco aimed to divide Republican Spain down the middle, and to inch forward towards Madrid destroying resistance in a chillingly methodical manner):

This phase can follow directly from the anticipation exercise listed above, or can be form the main activity in itself. Students use whatever sources are available to complete their map correctly.

If they have completed Phase [1] they should start by comparing their maps with a partner and as a class (the teacher could even try to reach a class consensus on a final, whole-class map). Then, when they conduct their research to complete a master copy, they will be much more engaged in the process and willing to answer such questions as “Were the borders substantially larger or smaller than you expected?”. 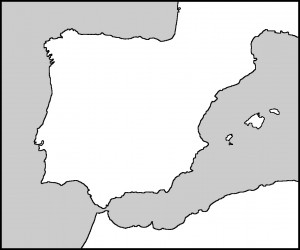 If the topic is a new one, it is unlikely that Phase [1] will be worthwhile and so students could proceed straight to this task. For example, I start my study of the Spanish Civil War with a homework exercise in which students are challenged to label an outline map of the Iberian peninsula with key features, cities and regions (in particular, noting where separatist movements were particularly strong, and the north-south divide in terms of agriculture and industry). A particularly interesting feature is the central location of Madrid, which has no economic sense whatsoever: it was consciously built there by King Philip II precisely because it was situated centrally in the land mass.

The map of Spain can then be returned to at regular points in the unit to add further labelled features – in particular the location of some of the key battles.

4. Use classroom debate to decide upon the most appropriate / likely border changes partway through a topic

This technique is similar to the anticipation exercise outlined above, but lends itself particularly well to topics involving debate between different parties about the most appropriate border changes. Students are arranged into small teams, with each person representing a different interest group, and they are then challenged to agree upon the fairest possible division of territory. For example:

5. Plot the movement of individuals along a path

This approach is useful when charting the journey of a particular person over time. As an added challenge, students could be provided with a ‘jigsaw timeline’ and reconstruct it into the correct order by plotting the places mentioned on a map and thereby deducing the most likely order in which they happened. Google Earth is particularly effective for creating these ‘tours’, and I have created several Google Earth Tours on ActiveHistory. Possible topics might include:

6. Chart the expansion / contraction of an idea, an empire or a catastrophe

The growth and decline of the Roman (and British, Ottoman and other) Empires lends itself well to mapwork. Students should shade different territories in different colours to represent the different time periods that they were absorbed into the Empire. For added challenge:

b. Diseases and Ideas 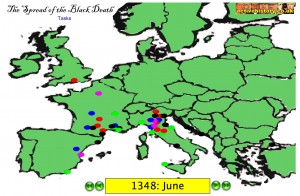 The spread of a pandemic as in The Black Death on ActiveHistory can be charted on a map very effectively. Data exists for the time when the disease was first and last recorded in various cities all over Europe, and plotting this information on a map in various colours to represent various dates is an enlightening exercise when trying to get students to appreciate the scale and speed of how the disease spread.

A similar approach can be adopted for more localised epidemics such as the 1830s Cholera Epidemic, for the spread of ideas like Martin Luther’s 95 Theses across Europe (surprisingly rapid!),

Geographic profiling is an activity I use when studying Jack the Ripper at ActiveHistory. It is the name we give to the technique used by the police to work out where a killer might live. It is usually the case that 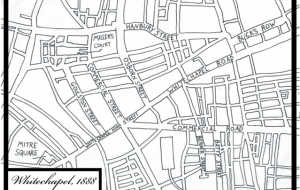 With this in mind, I instruct students to plot the location of each murder on the map. Then, based on the information, students are asked to speculate where they think that the murderer is most likely to live and to shade this area on the map. Finally, we look at what the most recent ‘Ripperologists’ have concluded before discussing the limitations of this evidence.

These represent just a few methods I have used recently with my own students. I’d be very interested to hear if you can think of any other topics that they could be applied to, or any other methods you use in your own classroom – you can contact me on Twitter @russeltarr.