Making “Top Trumps” work in the classroom: use WORDS, not RATINGS

Because “Top Trumps” is a simply game format to understand and play, this does not necessarily translate into an educationally worthwhile revision exercise. It’s important to make it a game based historical facts and reasoned explanation rather than a mindless card-swapping exercise based on arbitrary ratings.

The “Top Trumps” format lends itself most effectively to topics which require learning about the role and significance of a range of individuals. In this sense, the Russian Revolution provides an excellent example. Students are classically asked to assess the role of Lenin and Trotsky in the October Revolution of 1917, and the best essays are those which push things further by challenging the assumptions of the question by raising the possibility that maybe other people were equally or even more important.

To help with this, I provide students with a list of key characters, and get them to design a series of “Top Trumps” cards for as many of these as possible using a template I’ve put together in a word processor: 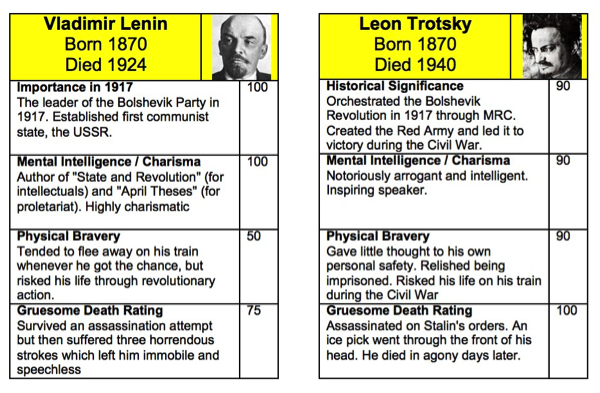 The categories decided upon by students should be as useful as possible (note – change these to when/where etc?) and can either be decided upon in advance by the teacher, or settled upon after discussion with the class.

For example, if the focus is on ‘significance’ the categories might be as follows:

Step 2: Playing the game focusing on the text, not the ratings

So far, so good. Students have spent time usefully researching or revising key characters, summaring their findings, and using these to make simple judgements in the form of percentage ratings. At this point, though, the rules of the game need to change to ensure that students at all times are discussing and debating the text in their respective cards rather than simply comparing the numbers and swapping the cards without further thought.

To achieve this objective, put students into groups of three and give each player in each group a letter (A, B, C). All players should shuffle their cards. In the first round, player “A” will act as the judge. Player “B” will take the first card from the top of their deck, and decide upon the strongest category for that character. They then name the character, nominate the category and explain why the character should score strongly in this regard (note: they do not need to read out the rating they gave and should be penalised for doing so). Player “C” responds by repeating this pattern for their own character. It is then up to the judge (Player “A”) to announce the winner, who takes the card from their opponent in the normal way. Player “C” then takes the lead by repeating the process with the first card from their stack.

Once these two players have had their chance to play one card each, it is time for the next round: player “B” becomes the judge, and the other two take it in turns to play cards against each other. Then in the final round player “C” becomes the judge in the same way. This process can be repeated over several rounds.