This activity is a development of the matrix exercise, designed to make it both more sophisticated and more engaging for students. It is an effective way of getting students to analyse lots of information analytically for a fresh topic. For example, I recently used the approach very effectively with my IB Year 12 students (aged 16-17) to teach Eisenhower’s foreign policy without any prior knowledge or preparatory study.

As per the matrix format, students are given two key questions to consider (e.g. “How successful…?” and “How innovative…?”) and then place particular pieces of evidence along the horizontal and vertical axes to reflect what is suggests is the correct spot with regard to each question (the vertical axis represents two opposing views on the first question – e.g. success v. failure, the horizontal axis the second – e.g. revolutionary v. reactionary).  In the following example, students considered the two questions “How successful was Eisenhower’s foreign policy?” and “How new was Eisenhower’s ‘New Look’ foreign policy?” (two common questions which through this exercise we can analyse simultaneously): 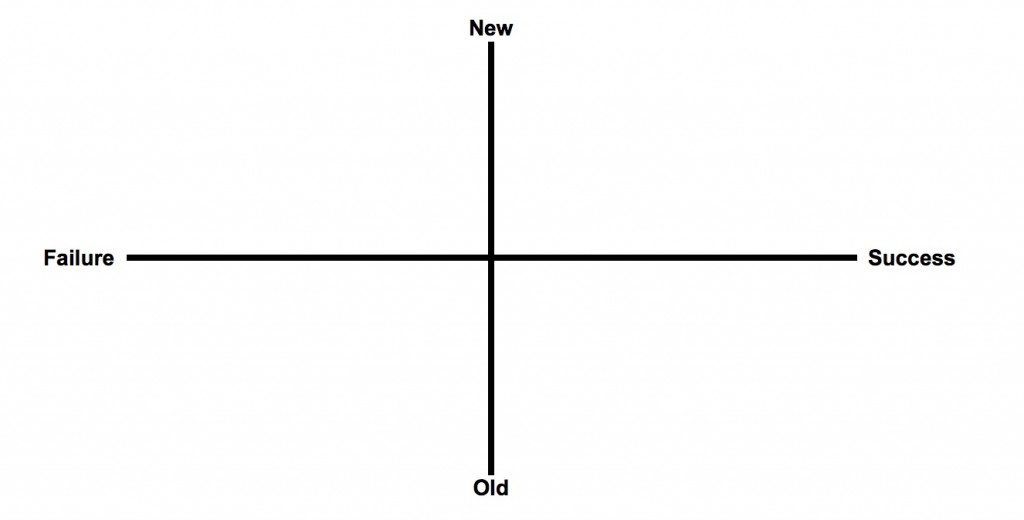 However, the twist this time is to turn the whole process into a team competition called ‘Interpretation Battleships’. This involves subdividing each quadrant of the matrix into four boxes (thereby creating 16 boxes in total). These are then individually referenced using a simple key (horizontal = letters, vertical = numbers, creating a grid of 16 squares that can be referenced as A1 to D4):

Each member of the class is provided with the pieces of evidence that will be considered (in the case of my lesson, this consisted of a very detailed article covering nine different policy areas, each considered under a different subheading). These policy areas are divided between three different teams. Working individually at first, then comparing their ideas with the rest of their team to reach a group agreement, students decide where their allocated policy areas / pieces of evidence belong in the matrix, and write a sentence of explanation on scrap paper ready for the game.

When they are finished with these allocated areas, they should repeat the process a second time for the remaining factors so that they have had change to consider them all. At the end of the process, each team will end up with their own version of a matrix which might look something like this:

When everyone is ready, the first policy area / piece of evidence is introduced.

The group who was allocated this piece of evidence (the “Quizmaster” team) stays quiet whilst the other two teams nominate the cell of the table that they think it should belong in and explain why. They should try to persuade the Quizmaster team with their reasoning!

The Quizmaster team then announces where, after full consideration, the factor belongs in the grid, and explains their choice. The teacher should record this decision in a ‘class’ version of the matrix.

A competing team gets one point if it placed the factor in the same quadrant as the Quizmaster team, and a further point if they placed it in exactly the same cell.

All students take notes to make sure they are clear for the reasoning behind this, and then the process is then repeated for the remaining cells of the table.

This approach is a really efficient way of getting through a big topic very efficiently and analytically which might otherwise involve inordinate amounts of classroom reading and teacher-led discussions.

It could be followed with a source-work exercise, where the views of key historians on the issues covered have to be organised in the matrix. This would be a very good extension / homework task for individual students to ensure that historiography was incorporated.

Each quadrant of the completed diagram forms the basis of a four-paragraph essay addressing both of the key questions covered at the start of the activity.