Giving students the flexibility to choose the content and / or the outcome of their homework assignments increases engagement and promotes independent learning.

Giving students the flexibility to choose the content and / or the outcome of their homework assignments is an effective way to increase engagement and promote independent learning. By giving the class an open-ended opportunity to reflect on what they need and want to learn about, and then to choose the most effective way to demonstrate their learning, students are able to take more ownership of their studies and teachers are able to cover more material in a more diverse manner. Another great thing about this approach is its ease of implementation: it does not have to be adopted wholesale for all year groups and all homework assignments, but can rather be adopted to different degrees and at the most appropriate times. This is an approach which has been popularised particularly by Ross M. McGill (@teachertoolkit – see his blogpost at http://goo.gl/QMNbvj). The hashtag #TakeAwayHmk is used on Twitter to share ways in which the approach has been used.

The challenge for teachers using the “choose your own homework” approach is twofold. Firstly, students will need to be given enough of a framework to help guide them towards the most appropriate task without it being so constrictive that the spirit of the approach is compromised. Secondly, the process of feedback and assessment will also to be reconsidered: open-ended choices of topics and outcomes means a more flexible method is necessary. This in itself is a challenge worth rising to. Feedback becomes more individualised and based on work which gives a much clearer idea about the interests and talents of the individual student.

Over recent years I have tried various approaches to the “choose your own homework” strategy. What follows is a short summary of several of the more successful examples, each of which provides a slightly different method.

The simplest way to get started with a “choose your own homework” approach is to allows students the freedom to choose their topic of study, but for the teacher to specify the outcome. In this way there is flexibility in terms of content, but the teacher will be able to measure some distinct skills through the work that is produced. I use this approach with my Year 12 students at the end of the first half term, when I set them a holiday homework designed to get them thinking about the possible focus of their Internal Asessment (a 2000-word independent study that has to be completed as part of the IB History course). The way I go about this is to give students a list of recommended podcasts (e.g. “Great Lives”, “In our Time”, “Witness” and “The Moral Maze”, all of which are freely available from the BBC). Their job is to listen to one hour’s worth of podcast material, and then use this to deliver a classroom presentation on one or more key questions raised by what they have learned. Example presentations that resulted ranged from “What are the main causes of the Arab-Israeli conflict?” to “How has game theory informed international decision making since World War Two?”. This podcast-based approach is easily adaptable to other subjects: the brilliant “Infinite Monkey Cage” podcast with Robert Ince and Brian Cox could give science students a similarly broad range of inspiration.

Example 2: “choose your own outcome”

My IGCSE History students reached the end of a heavily detailed and methodical study of Hitler’s foreign policy in the 1930s with a desperate need for some creative, independent work. I therefore gave them a homework which consisted of producing a resource designed to demonstrate their understanding of the key questions relating to Hitler’s foreign policy in such a way that they would find it a useful revision aid. I made it plain that I couldn’t care less what the outcome actually was, so long as it clearly demonstrated thought and effort and would prove useful as preparation for the final examination. I then gave the class some time in groups to list some possible outcomes, then we shared these as a class. The range of proposals was immense, including such things as a Google Earth Tour of the key locations of conferences and clashes relating to Hitler’s foreign policy; a ‘Diary of a Wimpy Fuhrer’ outlining the main steps towards World War Two in the form of an illustrated children’s book; a “TripAdvisor” review of each place coveted by Hitler from his perspective, complete with rating to indicate its importance; a photo-album scrapbook of a German soldier from the 1930s charting the progress of German foreign policy; changing the lyrics of a song to cover the topic essentials in a way that would be memorable, and much else besides. I took photographs of the best projects that resulted to provide further inspiration for next year. 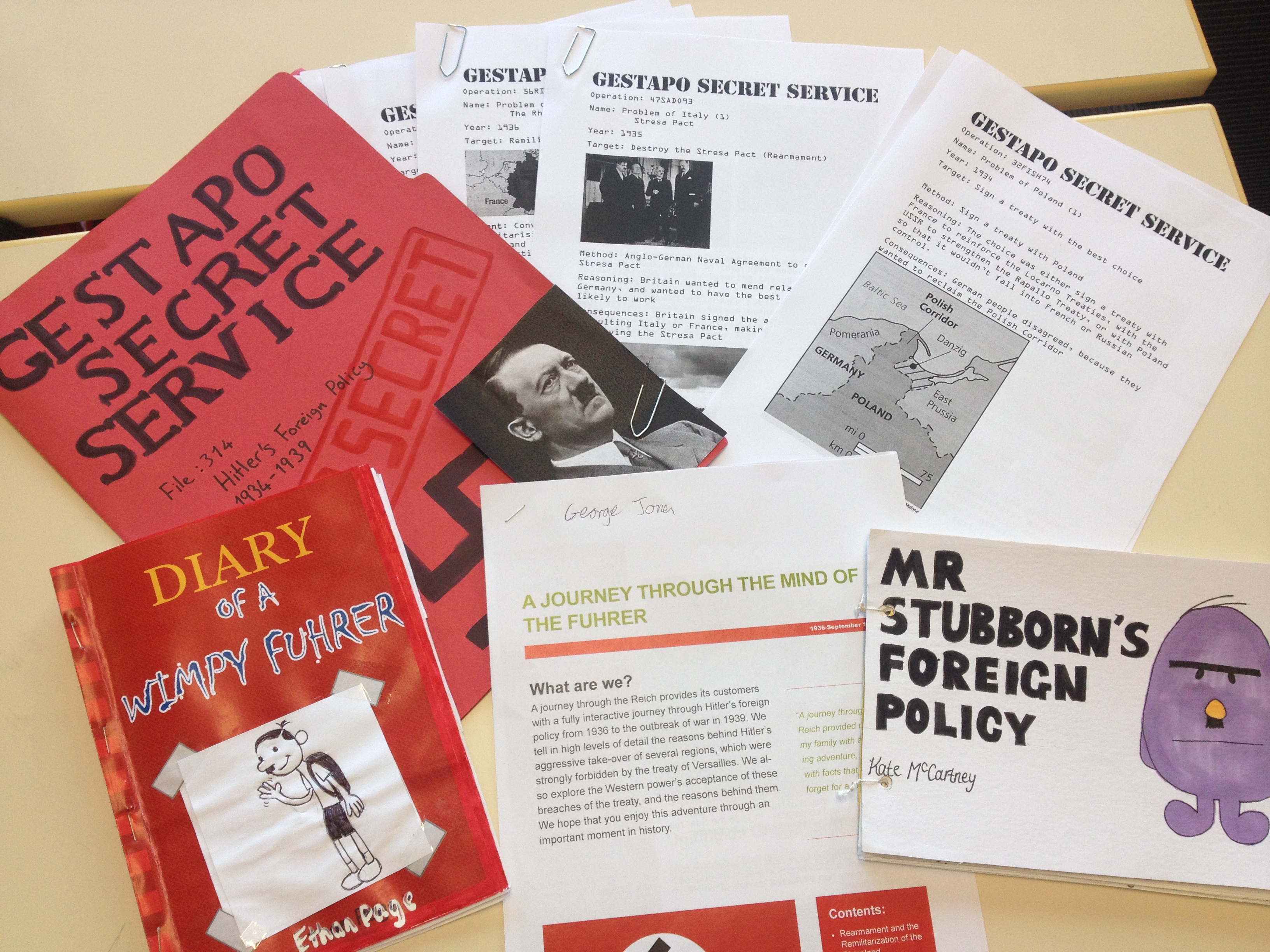 Another great outcome was produced by Jade, who decided to revise her entire History course by creating this fantastic tubular timeline tower (subject of this blogpost).

The most open-ended method of all, of course, is to give students the flexibility to choose both the topic and the outcome rather than merely one or the other. I tried out this approach recently with my Year 9 students. The broad theme I provided was the growth of the British Empire. I then provided them with a summary grid, with the main periods of growth forming the columns and the main countries and products involved forming the rows. Their job was to produce a homework based on one cell of the table (a particular event), one row (which focused on one of the key countries involved) or one column (which focused on one particular period). In this way they had a great deal of flexibility to choose a task corresponding to their interests and abilities. For example, the students who tended to focus on a single cell (event) in the table either did so because they wanted to keep the task more manageable, whereas others who did so opted for it because it addressed a key issue that stimulated their interest (a Dutch student investigate in more depth the occasion when the Netherlands sailed its ships up the Thames in a daring raid in 1667, for example). In terms of outcomes, one student decided to produce an image of what the dining room of an English middle-class family would have looked like before the impact of Empire, and then a second labelled image showing what it would look like complete with all the goods and produce at the end of the period. Another student produced a rapid stop-motion animation in which she shaded each territory as it entered the Empire, and then rubbed it out as the Empire dissolved, with captions explaining each step of the process.

Mark Creasy’s “Unhomework: How to get the most out of homework, without really setting it” (Independent Thinking Press, 2014) is absolutely essential reading for anyone interested in trying out various “choose your own homework” strategies. Mark can be followed on Twitter (@EP3577).

Ross Morrison McGill (@TeacherToolkit) has written a great blogpost: “#TakeAwayHmk is #UnHomework” (http://goo.gl/02eN9c). This also analyses the latest research about the importance of homework.