The ‘mysterious moment’ approach is a great way to engage students at the beginning of a lesson and to generate some interesting questions. It involves giving students an intriguing, mysterious and deliberately incomplete story based on a study topic by taking away key details, and then challenging teams to ask yes/no questions of the teacher to fill the gaps and deduce what is going on. Points are awarded to the team which first mentions keywords identified in advance by the teacher and which thereby demonstrate that they are edging towards the complete story. Finally, each student is asked to produce their own fuller account of the story, including all of the key words, using a range of sources provided by the teacher, as well as an answer to the question “What do you think historians use this event to illustrate?”. 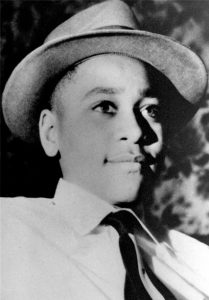 Start by nominating up to three “judges”. Divide the rest of the class into two teams. Then proceed to read out the “Mysterious Moment”:

“In 1954, a 14-year old from out of town entered a shop – even though his friends begged him not to. The person behind the counter was deeply upset by what then happened and told her family about it. At the funeral several weeks later, attended by hundreds of people and reported all over the country, the coffin was left wide open for everyone to look inside. Nobody went to jail as a result of this story”.

The teacher should then conduct a discussion to gather answers to the query “What are the most intriguing questions arising from this story?”. These might include, in this case, “Why were the teenager’s friends so desperate that he didn’t enter the shop?”, “What happened that upset the person behind the counter?”, “Why did the funeral only take place several weeks later?”, “Whose funeral was it?”, “Why was the coffin left open?”.

The next step is for each group to frame questions that can only be answered with a ‘yes’ or a ‘no’ to start obtaining the most important answers to these queries. For example, “Why did nobody go to jail as a result of this story?” could be converted as a starting point into “Is it the case that nobody went to jail because no crime had been committed?”

Whilst these questions are being framed, the judge(s) should be finding the answers to some of the key questions identified earlier using sources provided by the teacher or by using the internet. If they have time they should also start considering the question “What do you think historians use this event to illustrate?”

After a few minutes, when each team has had time to frame its questions, the first team asks a question designed to draw out a further key detail of the story. The judge(s) will answer this question with “Yes” or “No”. In addition, if the question itself contains one of the key words  or phrases decided in advance by the teacher, the team wins a point for getting closer to the final, completed story. In the given example, the keywords might be:

This process continues, with each team taking it in turn to ask its questions, until they have run out of questions, all the key words have been correctly identified, or the teacher decides enough time has been spent on the activity.

Finally, each team is invited to provide its overall conclusion on what they think happened before the judges give bonus points to the team who came closest to the truth. The full list of key words can then be displayed so they can reflect on whether they appear to be on the right track.

The judges can then share the complete story as far as they know it, or alternatively the teacher can set this as a independent research exercise (in this case, by telling students that they need to research the infamous case of Emmett Till).

To round off the classroom-based part of the activity, the teacher should lead a discussion – starting with the judges – around the question “What do you think historians use this event to illustrate?”.

The judge(s) could be invited to add further key words to the initial list as part of their preparation phase using their research to help. These might be a lot more specific and unlikely to be guessed in advance. However, the purpose they serve is that all these key words will need to be included in the final account of the completed story produced by each student following the exercise. Alternatively, the teacher can provide these words as part of the original list.

The great thing about the “Mysterious moment” approach is how quickly it can be put together. All you need to do is identify an memorable moment within a topic, reduce the story to its bare essentials, decide what additional terms are needed to bring the story to a point of comprehension, and you’re ready to go. For example, consider the following:

The Murder of Becket 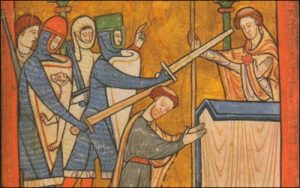 “Following the Pope’s orders, the King took off his robes and dressed in a rough tunic made of sack cloth. He then walked barefoot through the cobbled streets until he reached the cathedral. When he arrived, he fell to his knees and was then whipped three times by each of the 80 monks at the Cathedral. He then had to spend the night sleeping in the crypt of the Cathedral before returning home to his palace”

“Sir John Franklin sails abroad from England on an expedition. He is highly experienced, but his entire expedition vanishes without trace. Ten years later a woman pays a private investigator to find out what happened. When he returns, his conclusions are so shocking that she accuses him of being a liar. Over 100 years later scientists dug up a body buried at the scene – still perfectly preserved – and conducted tests which shockingly confirmed that the investigator was right all along”

To try out the technique for yourself, try to construct your own “Mysterious Moment” exercise based around one of the following ideas or any other questions appropriate to your studies: