“Tell us something we don’t know!”: A quiz to develop deeper understanding 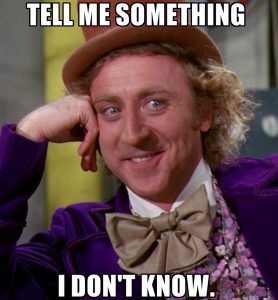 For examination subjects, content is king. Without a secure bedrock of factual knowledge, analysis cannot be attempted and evaluation and formulation of different perspectives is impossible. It was in order to find a fresh way of motivating students to acquire and effectively share their knowledge that I started using the “Tell us something we don’t know!” quiz format in the classroom.

This approach works well as a way of encouraging students to conduct some detailed research ahead of a lesson, but equally well as a revision strategy leading up to the examinations.

To conduct the game, start by giving all the students a homework requiring them to find answers to central examination-style questions. In the case of history, I set each the students three increasingly challenging questions, each one building upon the other, in the following format:

When the students return to class, they are divided into teams of three or four students. We then proceed with the quiz, with each student instructed to take notes as the game proceeds (alternatively, the teacher could act as scribe and make notes in a word processor, projected on the screen, and share it with students afterwards as revision material).

In this round, each team can provide one fact for one point, or pass if they have no ideas. The process continues until no team has any further points to make. Everyone makes notes as the story proceeds, putting notes into the correct order, then writes up their findings afterwards.
NOTE: As this is an ‘events’ question, a very valuable added twist is that after the first two events, teams get a bonus point if they can state an event which took place before the event nominated by the previous team but after the one that immediately precedes it in the timeline that is building up. In other words, it pays for each team to start with the earliest events and move forwards as steadily and logically as they can, so that this round allows all students to see the story develop, step-by-step, in a logical chronology as far as possible.

Here’s an example of what my 14-year old students produced, with no prior knowledge before their homework on this topic was set:

What were the main events leading up to the Anschluss with Austria?
▪ The Treaty of Versailles had forbidden any alliance between Germany and Austria. ▪ In addition, Austria lost half of its land after World War One (in the Treaty of St. Germain) and the prospect of unity with Germany became more appealing. ▪ In 1934, Hitler planned to invade Austria but backed down when Mussolini sent troops to the Brenner Pass. ▪ In 1936 the Rome-Berlin Axis was formed between Germany and Italy which removed the threat of Italian opposition to Anschluss. ▪ Hitler encouraged the Nazis in Austria to campaign for a plebiscite to secure an Anschluss. Austrian police later discovered Nazi plans for an invasion of Austria, which outraged Schuschnigg and led to him demanding a meeting with Hitler. ▪ In Feb. 1938 Chancellor Schuschnigg visited Hitler to try persuading him to bring the Austrian Nazis under control. ▪ Hitler bullied Schuschnigg at this meeting into accepting 10 demands including the appointment of leading Austrian Nazi Seyss-Inquart as a member of the government. ▪ Schuschnigg returned to Austria, then called a plebiscite to try to undermine Hitler’s claim that most Austrians wanted an Anschluss. ▪ Hitler threatens violent action and hurriedly draws up proper invasion plans at short notice; Schuschnigg resigns. ▪ The President of Austria appointed a new, Nazi-friendly Chancellor, who cancelled the plebiscite and also invited the Nazis in to ‘restore order’. ▪ Hitler sent troops into Austria to take the country over and announced unexpectedly – after a predictable triumph in a new Nazi-organised referendum – that Austria will now be incorporated into the Reich.

Each team provides one reason (substantiated with evidence) for two points, add a further point of information to substantiate an existing reason for one point, or pass if they have no ideas. The process continues until no team has any further points to make. Everyone makes notes as the story proceeds, then writes up their findings afterwards.

In this instance, my students came up with the following:

Why did Hitler encounter so little resistance when he absorbed Austria into the Third Reich?
One reason is because the Treaty of Versailles was considered too harsh on Germany: for example its economy had been badly destabilised by the reparations bill of £6.6 billion, Britain and France in particular were keen to make amends in a policy known as ‘appeasement’: this included being more open to a closer union between Austria and Germany for their mutual benefit. ▪ A second reason is because the Austrians themselves were keen on the idea: had lost half of their land after World War One and had been left landlocked (in the Treaty of St. Germain) and the prospect of unity with Germany became more appealing. In addition, the Austrians had been unified with the Germans for hundreds of years during the time of the Holy Roman Empire so there was a strong cultural link between the two countries and Hitler himself was Austrian. ▪ Finally, because Britain, Italy and France had been neutralised: in the case of Britain, the Anglo-German Naval Agreement had taken the sting out of British opposition to the Nazis, and the Rome-Berlin Axis had made an ally of Italy. These events destroyed the Stresa Pact and left France neutralised as a result – especially as at this point France didn’t even have a government following a political crisis.

To what extent do events in Austria show Hitler was a gambler rather than a planner?
How he was a ‘gambler:’ ¤ Hitler had already attempted but had failed: He had ordered Austrian Nazis to cause chaos in Austria in an attempt to overthrow the government. Italy also sent troops to the Austrian border whilst following the terms of the agreement with Austria to protect each other from outside aggression. ¤ Hitler hadn’t even told his closest advisors: they were only told he wanted the Austrian government to appoint Nazis into the government and undermining their independence. ¤ He was bold, and kept his nerve: he threatened to invade Austria despite the fact that his generals told him that they had not got any invasion plans drawn out and on hand.
How he was a ‘planner:’ ¤ Hitler made and alliance with Italy in advance: The Rome-Berlin axis was made in 1936 to ensure that Italy wouldn’t risk attacking Germany once again like she’d done in Hitler’s first attempt of Anschluss in 1934. In addition, he sent Philip of Hesse to smooth things over with Mussolini, who was thanked by Hitler directly afterwards in a personal telegram. ¤ The idea of expanding eastward had already been talked about in Mein Kampf: Mein Kampf, the autobiography written by Hitler himself, expresses Hitler’s want to unite Germany with his birth country, Austria.

The “Tell us something we don’t know” format can form part of the “Leaderboard Challenge” during revision period, when students build up an overall score with initial quizzes at the start of each lesson leading to an overall winner being declared.