A. Overview: What is an “Escape Room”? 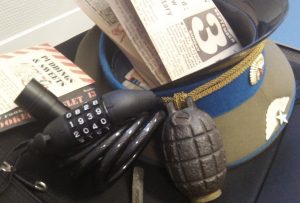 An escape room is, according to Wikipedia, “a physical adventure game in which players solve a series of puzzles using clues, hints and strategy to complete the objectives at hand. Players are given a set time limit to unveil the secret plot which is hidden within the rooms”. They are increasingly popular as team-building exercises as well as a fun leisure activity.

In the classroom, the “Escape Room” format should involve students working together, against the clock, to solve a series of puzzles using existing and fresh knowledge from their studies and from clues and sources which have been left around the room. They can be great for introducing a fresh topic, consolidating existing knowledge and introducing fresh learning into the classroom in a fresh and engaging way.

However, although they have great potential for creating memorable learning experiences in the classroom, they can easily become a time-consuming gimmick where plenty of fun is had but very little genuine learning is taking place. The challenge I therefore set myself was to develop an easily replicable format for setting up such activities which allows teachers to set them up quickly, and which simultaneously keeps genuine subject mastery at the heart of the excitement.

In this way I have focused on two key objectives:

If you develop your own Escape Room scenario based on these blogposts, I would love to hear from you with your ideas and suggestions – you can contact me on Twitter (@russeltarr).

I have produced two detailed case studies in how I have used Escape Rooms in a classroom setting. These should give you plenty of resources and inspiration to try them out for yourself!

BLETCHLEY 1945: RACE AGAINST THE CLOCK! It is 1945. Nazi Germany is on the verge of defeat after being invaded by the Russian forces from the East, and Allied forces from the West. You are a group of top-secret codebreakers at Bletchley Park, England. Thanks to you the Enigma codes of the Nazi high command were broken. However, our celebrations have been cut short because we have received an anonymous phone call that a bomb has been planted in our operations room by an enemy spy who has locked all escape routes. The caller is a double agent who was pretending to help this spy with their evil work. He is keen to help you escape but had to hide clues in the room so as not to blow his own cover. The weapon is locked in a suitcase in the centre of the room. Your job is to crack the code of the lock so you can open the case and defuse the bomb. It has been placed on a timer, leaving you only 45 minutes!

HAVANA 1959: ESCAPE TO FREEDOM! You are American business people from the United Fruit Company, placed under house arrest by the new Castro regime due to your close ties to Batista. You have managed to get the guard with rum and he has passed out. But you have only 45 minutes to find a way to escape before he wakes up and takes his revenge. Your job is to find a way to get the phone number of the CIA hotline, ring through to them and give the CIA operative the information he needs to spring you out of prison and fly you back to Florida and safety!

Here’s an example of another concept from a professional “Escape Room” company which looks intriguing!